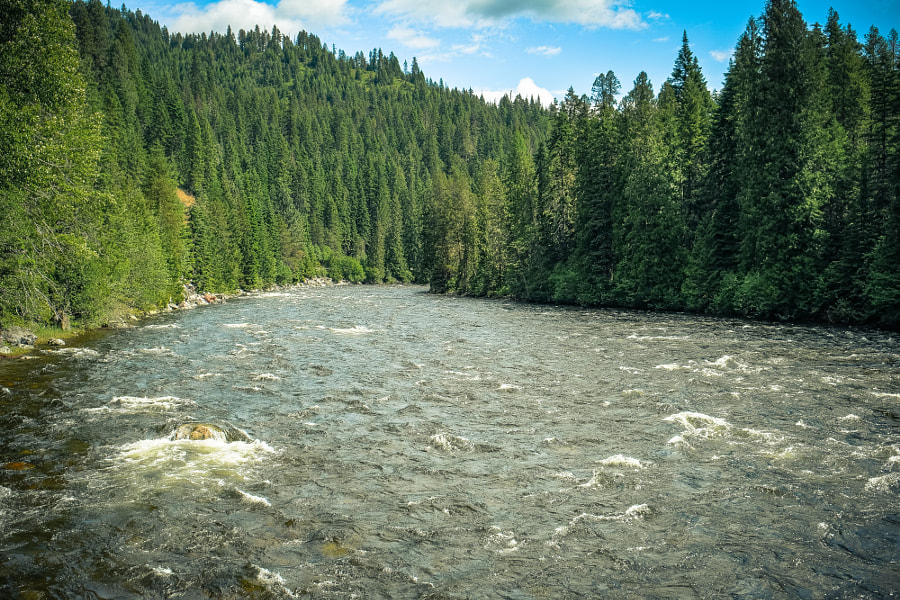 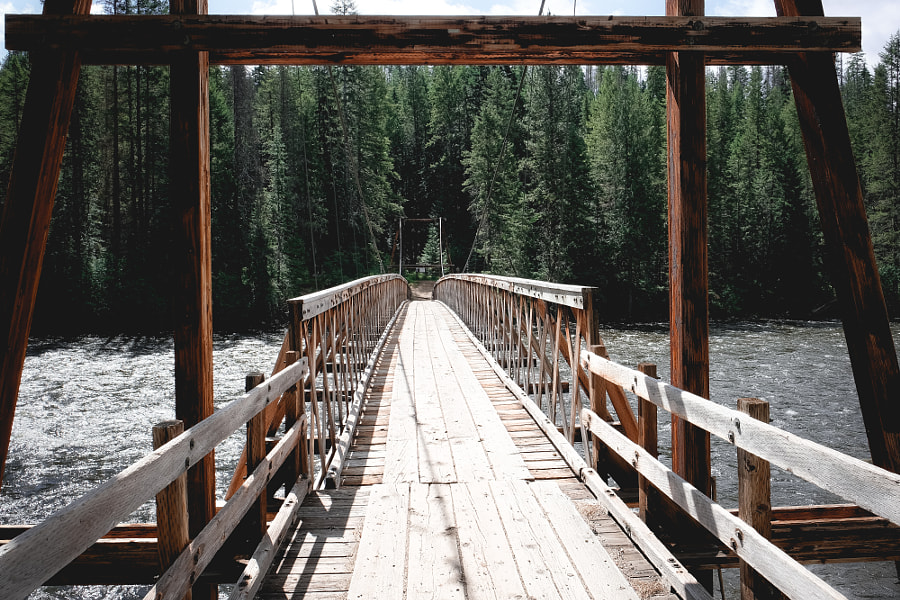 This bridge is near the trailhead to the Weir Hot Springs off of Highway 12 in Idaho. The last of the falls that Lewis and Clark had to get around on the Missouri river. This photo was taken from the side of the road that runs parallel to the Missouri in Great Falls.

A writer from the Century Illustrated Monthly Magazine toured the falls of the Missouri in the autumn of 1887 and reported: “The appearance of the Black Eagle Fall suggests its future use. Some day it will drive saws, spindles, and mill-stones.”4 Indeed, plans for harnessing the fall’s potential were already under way. The first dam, completed in 1891, provided both direct mechanical power and a limited amount of electricity for local use. At about ten o’clock on the morning of June 14, 1805, Captain Lewis took his gun and his espontoon and set out on a short walk up the north side of the river (at right in this photo), to see how far the rapids extended above the “grand Fall.” With the Hidatsas’ assurance of a half-day portage still in mind, he fully expected he would be back at camp by noon.

After passing one continued rapid and three small cascades of about four or five feet each[,] at the distance of about five miles I arrived at a fall of about 19 feet; the river is here about 400 yds wide. this pitch which I called the crooked falls occupys about three fourths of the width of the river, commencing on the south side, extends obliquly upwards about 150 yds.[,] then forming an accute angle extends downwards nearly to the commencement of four small Islands lying near the N. shore; among these Islands and between them and the lower extremity of the perpendicular pitch being a distance of 100 yards or upwards, the water glides down the side of a sloping rock with a volocity almost equal to that of it’s perpendicular decent.
For a time, later in the nineteenth century, it seemed to some viewers that “horseshoe fall,” would be more descriptive, but Lewis’s name has prevailed. The islands and sloping rock Lewis noted have been obliterated by the in-fill on the north bank, which covers three large pipes that carry water from an intake above Rainbow Fall to a powerhouse a short distance below Crooked Falls.

By Jim Wark
Of all the falls of the Missouri, this one remains the nearest to the way it looked to Lewis and Clark.

Just above these falls, the captain continued, “the river makes a suddon bend to the right or Northwardly. I should have returned from hence but hearing a tremendious roaring above me I continued my rout across the point of a hill a fiew hundred yards further.” — lewisandclark.org Rainbow Falls was first discovered by the Lewis and Clark Expedition. Rainbow Falls and downstream Crooked Falls are the only two waterfalls on the Missouri-Mississippi river system to remain in an almost-natural condition. Black Eagle Falls and Great Falls are half- occupied by their dams’ powerhouses, and Colter Falls is submerged. The waterfall received its name from the frequent presence of rainbows in its spray before the dams were built.

Meriwether Lewis was known to comment on the falls:

. . . hearing a tremendious roaring above me I continued. . . a few hundred yards further and was again presented by one of the most bea[utiful]objects in nature, a cascade of about fifty feet perpendicular stre[t]ching at [right angles] across the river from side to side to the distance of at least a quarter of a mile. here the river pitches over a shelving rock, with an edge as regular and streight as if formed by art, without a nich[e] or br[eak] in it; the water descends in one even and uninterrupted sheet . . .

The waterfall was named “Beautiful Cascade” and later “Handsom[e] Falls” by Lewis, but was given its present name by Thomas B. Roberts, a railroad engineer, in 1872. — From Wikipedia Some Bison enjoying the day in the Biscuit Basin area of Yellowstone National Park. This photo also includes the Sapphire pool and Firehole River.